“Man will become better when you show him what he is like.”
-Anton Chekhov

I live in Charlottesville, Virginia. On Saturday, I woke up to white vans carrying white supremacists through my neighborhood to Emancipation Park. The park, only three blocks away, is where the statue of Confederate general Robert E. Lee stands and where white supremacists chose to rally on August 12th.

All morning, the vans shuttled white supremacists to the park via our street. My friend Mattia, a medical student at the University of Virginia, stood outside holding a sign that read “Unity”—the phrase used this spring and summer to counter recent white supremacy demonstrations.

“You’d look better in an incinerator,” she was told. Others offered more traditional slurs. Some said nothing and simply patted the guns on their hips as they walked by.

Around 10:30 a.m., I made my way to Emancipation Park to document the rally and counter protests. I asked a police officer where I could find the press zone. (There had been a police line and press zone at the KKK rally on July 8, 2017, in Charlottesville’s Justice Park, where a statue of Stonewall Jackson stands.) The officer gave me a questioning look. There was no press zone.

When I arrived, there was no line between the neo-Nazi demonstrators—many in helmets and homemade riot gear wielding sticks and shields—and the counter-protesters—with signs, flags, and some with sticks of their own. A police car, covered in pink spray, sat unattended in the middle of the intersection.

As the confrontation escalated, a police officer declared an unlawful assembly over a megaphone standing next to an armored vehicle, and commanded that the white supremacist group leave Emancipation Park and that the counter-protesters clear the streets. I made my way through the park and the crowd of white supremacists, as some dispersed and others chose to disobey the order. One man, holding a large Nazi flag, stood calmly in the middle of the park. “Fucking beautiful flag man,” said a another man passing by. “Thanks. Appreciate it,” he replied. The Associate Press posted my footage from the scene on YouTube (below).

After the police cleared the park, I went home to regroup. On my way I stopped to capture a picture of a counter protester wearing a shirt that read, “Transgender veteran. I fought for your right to hate me.” At First Methodist Church, a block from Emancipation park, a collection of clergy lead a group in song.

Around 1:45 p.m., James Fields Jr. drove his car into the crowd of protesters downtown. I had heard only vague details of the crash by the time I returned downtown and found three rows of riot police blocking the street.

On the street where Fields plowed into the crowd, a discussion between a white supremacist and his friends and counter-protesters quickly became a heated confrontation. A man in a “Make America Great Again” hat acknowledged that he was happy people had been hit by a car. A counter protester loudly pointed him out to others on the pedestrian mall. As the man and his friends began walking away, he was surrounded by counter-protesters. A woman in the crowd knocked the Donald Trump hat off of his head. People told him to “get the fuck out of here” and then began chanting “Who’s town? Our town!”

The man and his friend walked down the street. A counter protester flipped him off. He turned and gave the Nazi salute. Immediately, he was punched in the face and hit with a stick. His “Roman shield” (as he described it) was taken, stomped on, and destroyed.

He and his friend began walking down the mall, pursued by the group of counter-protesters. This pursuit lasted a tense two blocks—the friend asking himself, “Where are the cops?” The man and his friend entered an alcove where a half dozen police officers were stationed. In that alcove, police, white supremacists, counter-protesters, and press converged. Counter-protesters and white supremacists traded insults and accusations. The standoff lasted several minutes until a second group of police used pepper spray on those of us in the front of the alcove.

Later, back on 4th Street NE, where Fields drove into the crowd, the National Guard marched in. They were played in by a man with a guitar and a peace sign. Counter-protesters demonstrated in front of the police line, with impromptu speeches, music, and chants.

On the way home, the park and intersection where the day began were empty, guarded by police.

On Sunday morning it was mostly camera crews and people coming to pay their respects to Heather Heyer, the woman killed by Fields, and H. Jay Cullen and Berke M. M. Bates, the two police officers who died in a helicopter crash as they patrolled the day’s events. I stopped to watch another reporter interview a friend of one of the officers. After remembering his friend, the interviewer asked him what he’d been doing yesterday. He replied that he stayed home with his family, not wanting to give an audience to the white supremacist group. But he now felt differently. He said it was important for people to come to downtown on Sunday and show that white supremacy is unacceptable and unwelcome in Charlottesville.

Who We Can Be

On August 12, 2017, white supremacists, counter-protesters, police, press, and people of Charlottesville participated in and witnessed a battle for human nature. Every person involved in the day’s events had an idea of why they were there, why others were there, what they believe, what others believe, that there’s a right way to think and a wrong way, perhaps with some gray in between.

Charlottesville’s battle for human nature was about who we think we are and who we can be.

This battle now rages on Twitter, Facebook, and television. It will continue both online and in the streets, when Charlottesville is replaced by the next city. But it will also continue in offices, schools, court houses, and homes. People will become experts on human behavior, prescribing motives to those they agree with and those they don’t. They’ll know why events unfolded as they did and who’s at fault. The phrase “human nature” will be used as the reason for violence and the reason for compassion. But these explanations will often be false hopes, illusions constructed to make sense of the chaos.

The title of this article was inspired by Barry Schwartz’s 1986 book, The Battle for Human Nature. Schwartz provides a lesson that has stayed with me since I first read it, nine years ago. The power of behavioral science resides not in revealing what human nature is or is not, who we are or are not, but rather who we can be. And, on some level, about who we ought to be. Our understanding of who we can and ought to be matters because it influences how we design our social institutions—which then shape who we, our children, and our neighbors become.

Schwartz describes how theories of human nature can lead to the differential treatment of men and women:

“Many of the moral issues that have been debated over the years—issues concerning the rights and responsibilities of citizens and the rights and responsibilities of the state—have historically been answered in one way for men and in a different way for women. At different points in history, women have been denied the right to vote, the right to own property, the right to an education, even the right to some control over what happened in the marriage bed. Within a framework of a theory of human nature that treated certain differences between men and women as fundamental, none of these practices would have been regarded as immoral … That a host of individual rights for which American colonies had fought a revolution were routinely denied to a major segment of the population would simply have been viewed as the nature of things.” (p. 31)

Charlottesville on Saturday exemplified all that we can be. We can be a counter-protester calling for unity, the man brandishing a Nazi flag, the pastor leading her congregation in song, the white supremacist carrying a gun or the anti-fascist holding a bat. We can be the black police officer protecting white supremacists’ right to free speech. We can be a legal observer or a member of the press. We can be a guitarist with a peace sign.

One of the primary responsibilities of behavioral scientists is to provide evidence for who we can be—the inspiring, ugly, and mundane. Much of modern behavioral science emerged as people tried to understand the Holocaust. Stanley Milgram, Solomon Asch, and Kurt Lewin are only a few of the psychologists who tried to make sense of the atrocities in Nazi Germany.

Today, just as they were then, people are desperate to understand themselves and others.

In this battle for human nature, behavioral scientists have a pivotal role to play. They can and must help people understand the people we can be. 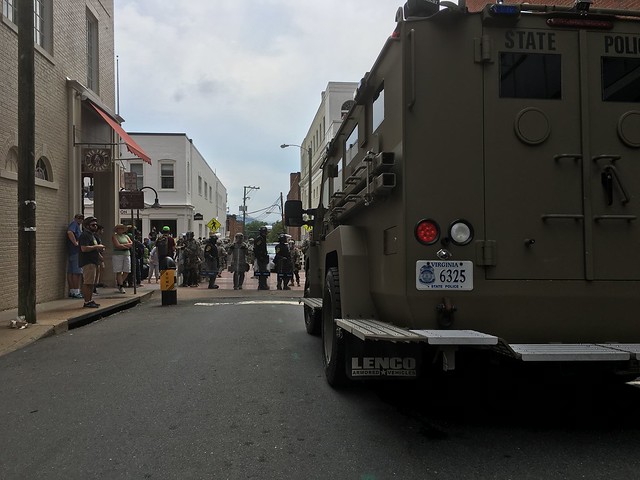